Fealla-dhà is geamannan a chum spòrs agus cothrom do chuid Ghàidhlig a chleachdadh / Fun and games, for fun and a chance to pratice your Gaelic
Post Reply
First unread post • 25 posts 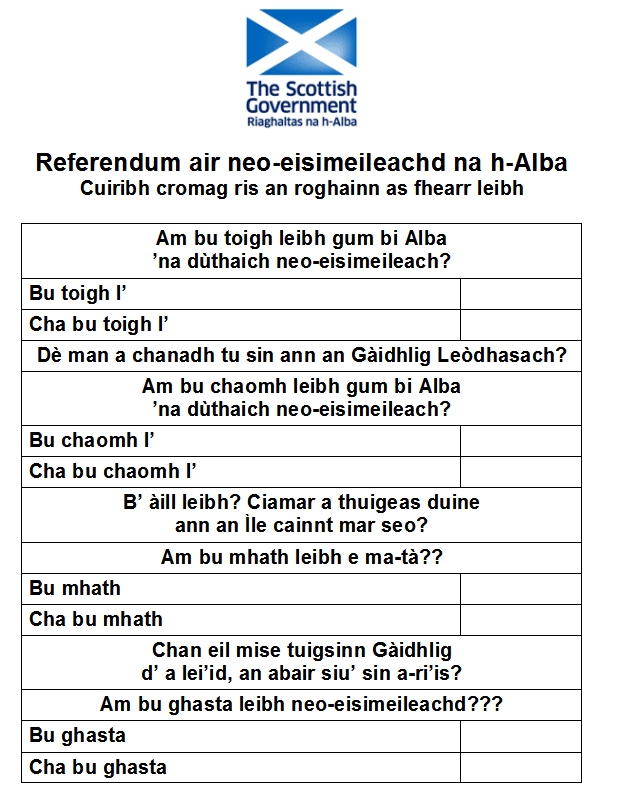 Mar a thuirt mi do Fhionnlagh fhèin, it's too politically-loaded an act, and it would guarantee a "no" vote, as it would be used to reinforce unionist claims of "shortbread tin" nationalism.

A different tack would be to move for Gaelic to be included on all ballots, and then it would be a natural consequence that we'd see Gaelic on the referendum ballot. UK rules say ballot papers can only be printed in English and Welsh. Why? Because the Welsh language got its recognition through a Westminster vote. Westminster cunningly devolved language responsibility to the Scottish parliament, so the legislation we pass only affects bodies ruled by the Scottish Government, and the Electoral Commission is ruled by Westminster.

Smart, targetted campaigning would be to demand that Scottish Gaelic gets the same rights as Welsh, and there's an early-day motion in parliament with that very aim. So why not contact your MP and ask him to sign?

After all, it's only equitable and fair -- we're not asking for any special privileges.
LinguaFrankly.blogspot.com
Top

Here's what I wrote to Charles Kennedy (Ross, Skye & Lochaber):


I am writing with regards to EDM 2822, in the hope that you would sign it and recommend it to your colleagues.


I am currently studying Gaelic at the Sabhal Mor Ostaig, part of the UHI network, in your constituency. It is a point noted and actively taught on the college syllabus that the treatment of Welsh and Gaelic by the government is markedly different, as a result of Welsh language legislation being put through Westminster, and Gaelic language legislation being devolved to the Scottish Parliament.


This leads to the situation where a Welsh speaker is allowed to demand a whole host of public services through the medium of Welsh (right up to a bilingual ballot paper in a general election) but the Scottish Gaelic speaker is denied these same services through his own language. To me it seems right and proper that equal rights are given to both languages.


More than this, the current UK government stance that Gaelic is a devolved matter appears to run contrary to the wording of the European Charter on Minority Languages, which states that

"the right to use a regional or minority language in private and public life is an inalienable right conforming to the principles embodied in the United Nations International Covenant on Civil and Political Rights, and according to the spirit of the Council of Europe Convention for the Protection of Human Rights and Fundamental Freedoms" [preamble]


As a considerable proportion of the public sector services in Scotland are maintained by Whitehall and Westminster, the services provided by the Scottish Government are clearly insufficient to guarantee the Gaelic speaker's right to use his language in public life.


Indeed the Charter also states:
"
1.The Parties undertake to eliminate, if they have not yet done so, any unjustified distinction, exclusion, restriction or preference relating to the use of a regional or minority language and intended to discourage or endanger the maintenance or development of it. The adoption of special measures in favour of regional or minority languages aimed at promoting equality between the users of these languages and the rest of the population or which take due account of their specific conditions is not considered to be an act of discrimination against the users of more widely-used languages.


There is as yet a great deal of "exclusion", "restriction" and "preference" if the minority language cannot be used in basic, fundamental government services such as taxation, company registration and (again) voting.


So I would ask you to support this motion, on behalf of the many of your constituents who would benefit from having the choice of which language to use when dealing with their government.